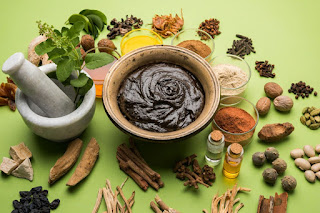 ‘Ayurveda’ is generally understood as ‘Science of life’ translating ‘Ayuh (r)’as life and ‘Veda’ as science. Ayurveda is an ancient system of life and also the oldest surviving medical system in the world. Dating back almost 5000 years, it is also considered to be an ancient science of healing that enhances longevity. It has evolved from the quest to have a happy life, through a deep understanding of creation and its maintenance, perceived and conceived by the rishis or seers of ancient India. Ayurveda emphasizes upon life in general with bit more emphasis on human life.

Its influence can be found in many ancient traditional methods of healing including Tibetan, Greek, and Chinese medicines thus making it the ‘mother of healing.’
The fundamentals on which the Ayurvedic system is based are essentially true for all ages and so can be easily adopted time after time, century after century. The philosophy of Ayurveda teaches a series of conceptual systems characterized by balance and disorder, health and illness. It teaches that a person’s mental, emotional and spiritual being are all interconnected and any kind of imbalance between them results in health disorder and diseases. Therefore, to be healthy, harmony must exist between the purpose for healing, thoughts, feelings and physical action.
Health and disease are defined in a very special way in Ayurveda. Ayurveda’s central tenant is that life is a manifestation of mind, body, soul and spirit. Body and mind are prone to suffering while the spirit is free of any such trappings of life. Thus to remain healthy and happy, efforts are required to be made in the direction of maintaining harmony among all these elements and only then can one get closer to the goal of longevity and disease free life.
Ayurvedic science is not merely a traditional Indian form of medicine but a perennial naturopathic system of healthcare that has survived the test of time as well as onslaught of modern science and methods of treatments. Based on wisdom acquired through the centuries, the main aim of Ayurvedic science is to achieve perfect health by creating an equilibrium of perfect harmony between human body and the environment it habitats.
Ayurveda is also known as the science of living a healthy and illness free life. It is built on the premise that in olden days, man used to live close to nature and whenever he got exposed to some disease, he used to cure himself using resources and material provided by the Mother Nature. It therefore would not be wrong to say that Ayurveda charts out a health patter based on nature and its natural resources.
The Vedic philosophy believes that human beings are all a part of nature. Just as animals and plants are interdependent on each other to create balance within their beings, there is a concurrent and inherent connection between the universe and human beings. The complex world that the human beings reside in, is perpetually exposed to environmental changes. Any amount of change in weather, lifestyle, diet, work, emotions and relationships can easily tip the balance and negatively influence an individual’s state of mind, body and soul.
Ayurveda calls for a complete harmony of human body with the elements of nature and the surrounding environment for a stress free and healthy life. The Ayurvedic science does not merely deal with medical science but its scope goes much beyond the universe of the conventional science. It also includes factors like herbal medicine, body works, and surgery apart from social, psychological, ethical, spiritual and intellectual life of human beings.

According to Ayurveda, each one of us has a unique mix of three body principals that constitutes our mental, physical and spiritual well-being. These three principals are known as doshas, which are further classified as Vata (air-ether), Kapha (water-earth) and Pitta (water).But each individual has its own unique constitution that is usually governed by one or two of the doshas predominantly. It means that that our Ayurvedic constitution is mainly be either of these doshas or a mixed constitution of two doshas like Vata & Kapa, Kapa & Pitta or Vata & Pitta.

Kapha dosha governs all structure and lubrication in the mind and body. It is the principle that holds the cells together and forms the muscle, fat, bone, and sinew. It controls weight, growth, lubrication for the joints and lungs, and formation of all the seven tissues — nutritive fluids, blood, fat, muscles, bones, marrow and reproductive tissues. It helps build excellent stamina but when it goes out of balance it can also cause a person to become overweight, sleep excessively, and suffer from the problem of diabetes, asthma and depression.

The pitta Dosha controls digestion, metabolism, and energy production. The primary function of Pitta is transformation. Those with a predominance of the Pitta principle have a fiery nature that manifests in both body and mind. Pittas have a lustrous complexion, perfect digestion, abundant energy, and a strong appetite. When out of balance, Pittas may suffer from skin rashes, burning sensations, peptic ulcers, excessive body heat, heartburn, and indigestion.

The vata dosha is known to govern all the movements of mind and body. From controlling the blood flow to elimination of the waste and harmful toxins to breathing and the flow of thoughts in the mind; the vata dosha is like a predominant force that minimizes stress and feeds the creativity within you. If the vata dosha is in balance, you will feel energetic, enthusiastic and lively, but the moment it becomes imbalanced, it manifests in the body problems like constipation, hypertension, fatigue, digestive challenges and restlessness among others.

Ayurveda understands health as a reflection of a man living in harmony with nature and disease arises when this harmony gets disturbed. In the ancient times, rishis and sages believed in Ayurvedic herbs as the solution to cure a number of health problems and sickness. The conducted thorough studies and experimented with these herbs before arriving at any conclusion regarding the accuracy of the medicinal values of these herbs and their effectiveness in treating various ailments and diseases. Due to their natural Ayurvedic herbs are considered to be free of any side effects and thus enjoy a global appeal.
Ayurvedic medicines are mostly formulated using a mix of herbs and other plants, including oils and common spices. By combining several kinds of plants and herbs to get benefit of the drug or therapeutic value, Ayurveda has proven itself capable of overcoming various health problems that occurs in the human body. Today, Ayurveda is being widely used in modern medicine systems. This was triggered by a number of research-conducted by scientific research and has proved how effective and positive the role of plants or herbs can be on human health.
Herbs play a vital role in the Ayurvedic system and a small herb is known to dissolve stones in the kidney, bladder and gall-bladder easily and effectively. Apart from timely cure, Ayurvedic herbs are also know to provide permanent relief from a disease by removing the metabolic toxins from the body. Know more about the various Medicinal Plants and Their Uses.

Ayurvedic home remedies are considered safe as they are natural and herbal in nature, therefore, free from any side effects. They have an advantage over other methods of treatment as Ayurvedic remedies are known to cure the disease form the root, effectively. Treating an ailment or a disease using Ayurvedic remedies will not only help you get rid from it permanently but also aid you in leading a healthy life in the long run.
Some of the major benefits of using homemade Ayurvedic remedies include:
Ayurvedic Medicines
Ayurvedic Medicines are fast gaining popularity across the world. One of the major reasons for it being that Ayurveda seeks to normalize body functions with varied techniques including advice on food and activity, internal herbal preparations, purification treatments (panchakarma), and surgical methods (shalya chikitsa).
Ayurveda is based on the belief that the delicate balance of mind, body and spirit determines health and wellness of the body. The goal of Ayurveda is prevention as well as promotion of the body’s own capacity for maintenance and balance. Ayurvedic medicines are non-invasive and non-toxic in nature and therefore are free from any side effects.
Using Ayurvedic medicines in your daily life enables you to re-establish balance and harmony in body’s system, aids in detoxification and cleansing of the body by removing accumulated toxins and normalize body’s functions. Read more on how to remove toxins from body. Products made using Ayurvedic plants have a stronger action on the body as they help in stabilizing the doshas. The medicines are formulated with thorough research and expertise in the field of ayurvedic medicine.
Tulsi, Guduchi, Ajwain, Brahmi, Shilajit and Ashwagandha etc., are some of the most commonly used herbs in Ayurvedic preparations. Each of these herbs or spices hold a multitude of benefits – for the mind, body, and spirit and can be easily used internally or externally, depending on the need. Dabur, the best Ayurvedic Company has a wide range of natural and Ayurvedic products which are formulated to not only help you maintain a healthy lifestyle but also promote the holistic well-being of mind and body.

Ayurvedic treatment is also called as “Ayurvedic Healing”. It combines products which are mainly derived from plants, herbs and minerals followed by a well – balanced diet, exercise, and a healthy lifestyle. Unlike other methods of treatments, the ayurvedic treatments are targeted toward specific health problems. The treatments are specifically designed considering a human being’s physical, emotional and social well being by balancing between all three of these elements.
The aim of treatment is to cleanse your body of undigested food, which can stay in your body and lead to various diseases in future. One of the cleansing process is called “panchakarma” and is designed to eliminate the impurities from the human body and keep a balance. So as to achieve this, an Ayurvedic practitioner might suggest therapies like blood purification which includes massages with medical oils, herbs, and enemas or laxatives.
Treatment in Ayurveda is a healing process which aims at getting rid of the disease, preventing its future occurrence and ensuring overall well-being. The treatment attacks the root cause of the problem as its objective is not just restoring health but also to create balance in the body. It is achieved by balancing the doshas which in turn eliminates toxins and strengths the digestive system thereby opening up channels and rejuvenating the tissues.
Recently the western countries have also started to follow the route of Ayurveda through natural therapies such as Ayurveda, Yoga and Meditation.

Ayurveda treatments can have positive effects when they are used as a complementary therapy in combination with standard, conventional medical care. Complementary health approaches include natural ingredients such as herbs, vitamin, minerals, and probiotics. They are marketed widely and are readily available to consumers in the form of dietary supplements.
0
0